skip to main | skip to sidebar

白居易 Bai Juyi: 暮江吟 Song of the River by Evening

POSTSCRIPT (9 August 2012):  I now add below the picture taken.  I was on the south bank of River Arno pointing my camera eastwards at the famed Ponte Vecchio while the sun was setting on the west.  Unfortunately, it was not dusk and the moon was not up yet.
. 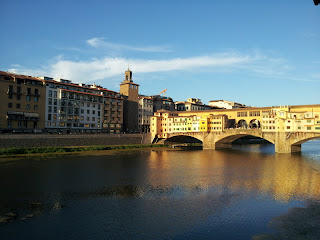 ORIGINAL POST:  I have just returned to Hong Kong from a trip to Italy.  While in Florence, I attempted to take a picture of the setting sun at River Arno obviously because my rendition of this beautiful poem by Bai Juyi was fresh on my mind.  Then in Rome, on the famous Via della Lungaretta, I met an amateur photography artist and was unable to resist the urge to share with him my rendition, but only the first 2 lines.  I promised him I would post it the soonest.  Here it is.  Please enjoy it.

1  A sunbeam paves the water, the last of  a sun sunk low;
2  Half of the river rippling, half in red aglow.
3  How so lovely this third night, ninth month lunar calendar,
4  Dewdrops seem like pearl drops, the moon, like a bow.

*    This English rendition is in hexameter (6 metrical feet) while the original is in 7-character lines.  The rhyme scheme is AAXA as in the original.

*    Line 2:  I had considered “One half …, one half” but have decided against the superfluous “one”.  I had originally penned “river in ripples” so as to include in both half lines the word “in”, but have now decided for “river rippling” as this brings the 2  r-sound words closer together to better translate 瑟瑟.

for your nice rendition and the nice pic (that evokes some fond memories).

may i post below another rendition of the same bai juyi poem? (my interpretation of 瑟瑟 is quite different from yours.)

Setting-sun remnants carpet th' river, set it aglow;
Half of the river is dark green, the other, reddish pink!
O The third night of the ninth moon is most enchantin';
The dews hang like silver pearls, the Moon, a golden bow.

I thank Frank for his rendition and his interpreting 瑟瑟 as "dark green" which I had considered but rejected and which reasons I should have but have not included in my notes. In the 辭源, 瑟瑟 as a 2-character term (word)) is defined as (1) sound of wind 風聲, (2) name of a jewel 珠寳名, and (3) green colour 碧绿貌 quoting the very same line of the very same poem as authority. While (1) is probably an onomatopoeia of the sound of wind and (2) is apparently a transliteration of a foreign imported jewel, (3) is simply by definition. It is green because Bai Juyi meant it to be green; but did he? Why did'nt he pen 半江碧绿半江紅? Sorry, I have to go. More to follow tomorrow.

Continued. 辭源's definition (3) of 瑟瑟 has the support of another dictionary the 漢語大詞典 which cites lines from 2 more poems: 韋莊 Wei Zhuang's 留得溪頭瑟瑟波 and 陸游 Lu You's 水面初生瑟瑟波; these, however, are also open to interpretation.

What I have done is to treat 瑟瑟 not as a 2-character term (word) but as the repetition of the single character 瑟 so as to convey the image of continually flowing water and the sound of it. 漢語大字典 (yet another dictionary, not the 詞典 quoted above and below) defines 瑟 as (5) 泉流貌 descriptive of a flowing stream. 漢語大詞典 defines 瑟 as (6) 象聲詞, 參見"瑟瑟", "瑟汩" onomatopoeic term, ref. "se se", "se gu" (Cantonese "sat sat", "sat guat"). It further defines 瑟汩 as 水流聲 sound of flowing water. I have, therefore, decided for either "rippling" or "in ripples".

The great poetry translation master 許淵冲 Xu Yuan Zhong probably had similar suspicions when he translated this Bai Juyi poem and had rendered the line as "Half of its waves turn red and the other half shiver" using "shiver" to translate 瑟瑟 in accordance with definition (6) of the 漢語大詞典 (形容發抖的樣子 descriptive of shivering). If I were to (which I perhaps should) follow his interpretation, I would have penned my line as "Half of the river quivering, half in red aglow".

Mine may not be the most faithful interpretation. Yet, I believe it gives out a beautiful image worthy of a poet like Bai Juyi.

after much thought, i agree both XYZ's interpretation of "shiver" and yours of "rippling", to translate 瑟瑟 (in 半江瑟瑟半江紅) in accordance with definition (6) of the 漢語大詞典 (形容發抖的樣子 descriptive of shivering) -- are both acceptable.

but just acceptable and not really v "faithful" since neither word describe the actual "sound" of the flowing water. you 2 just indirectly describe the movement of the river -- but it is a silent picture, whereas as you said above li bai probably meant this to be an audio version too!

allow me to explain myself more clearly.

from your detailed research, it is quite clear 瑟瑟 , as a 2-character term (word) -- as in 半江瑟瑟半江紅 -- can or could have one of the following 4 meanings:

4. descriptive of a flowing stream 泉流貌, and

XYZ and your own interpretations, as defined under 4. above, appear to be on a path less travelled by the majority of translators.

just a minor observation here, that's all and thank you!

A shard of setting sun
fallen across the water
turns the river half emerald, half red.
I love these nights in early September,
with the dew like pearls
under the bow of the moon.

This is a link is to "Modern Chinese Poems", a blog to which I contribute at times.

Andrew W.F. Wong 黃宏發
Sai Kung 西貢, New Territories 新界, Hong Kong
Andrew Wang-Fat Wong 黃宏發 (Chinese pinyin Huang Hongfa) was the last President of the Legislative Council of Hong Kong during British rule. He first picked up this fascinating hobby in 2007 and has so far been concentrating on the “jueju” 绝句 or quatrain (4-lined verse) of the Tang Dynasty venturing occasionally into other forms of classical Chinese poetry.